Current price and other data:


In this guide we will look at the Nexo from several different perspectives:


Is Nexo a good investment - what does social media tell us about this?

Social listening is a strategy that allows for the monitoring of social media channels to find out what people are saying about individual coins.

From this social media data we determine:

Why can tracker of crypto social media mentions help?

Tracking of social media mentions helps, because the price of coins is often intertwined with activity on social media.

See in the chart below how there was years of disinterest in Dogecoin on social media, followed by spikes in social media mentions along with price rise:

Let us now turn our attention to Nexo. You can see the number of daily mentions of Nexo and NEXO in social media posts in the following chart.


Check video of our platform

You can use our platform by subscribing to one of our plans.

Daily social media sentiment of Nexo and NEXO is available in the following chart (for longer history dating back to 2017, subscribe to one of our plans):

Comparison of hourly sentiment of NEXO and Bitcoin

The interesting development and insights can often be obtained from same data but based on smaller, hourly interval.

You can get the mentions and sentiment of coins on hourly level as well, by subscribing to one of our plans.

Words that are most frequently found in positive sentiment social posts about Nexo and NEXO are:

Words that are most frequently found in negative sentiment social posts Nexo and NEXO are: 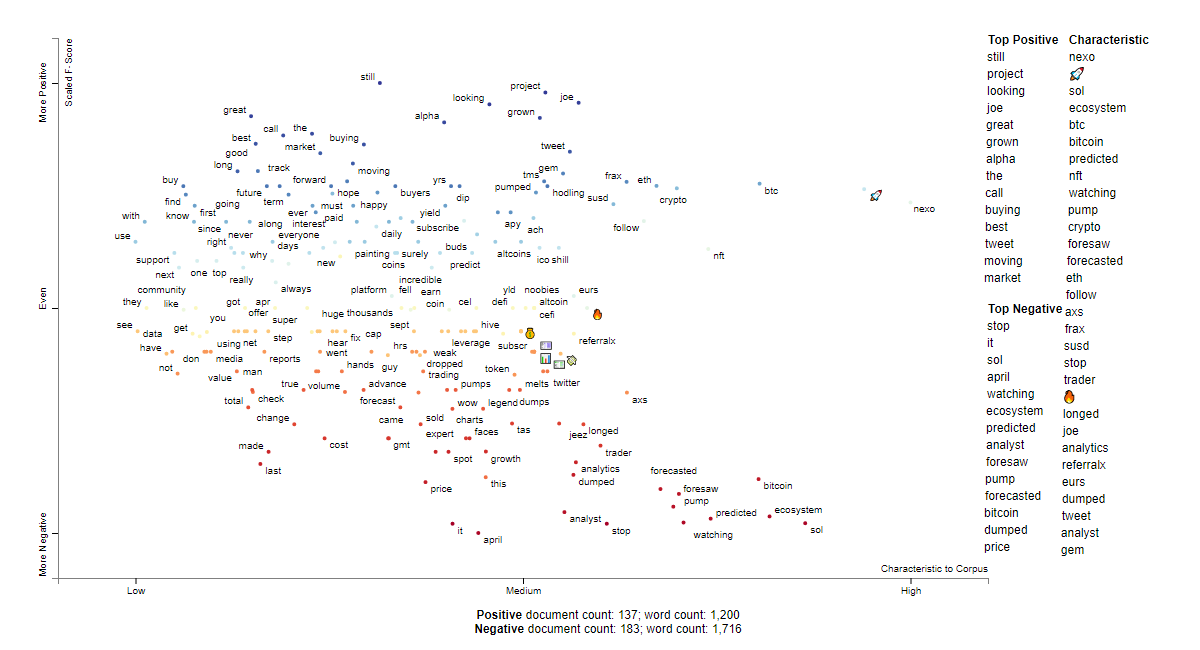 We collect interesting Reddit posts about Nexo, here is our selection of posts:

Bull and bear markets of Nexo

Nexo has experienced a number of bull and bear markets in the past, see chart below:


What is Nexo biggest bull run ?

Download historical bull and bear markets data for Nexo by clicking on the button below :


Get csv of bull and bear markets

Sentiment of cryptocurrency news about Nexo and NEXO

We also compute sentiment for all the news that mention Nexo and NEXO. Here is an example of recent, sentiment annotated news about Nexo:

There are many possible approaches to price prediction of Nexo. Many of our clients decide to generate price predictions by using our API to download vast amounts of data we have accumulated since 2017 and then develop trading models using our data.

For backtesting, there are many excellent open source libraries available:

Is NEXO a good investment - quickly compare Nexo to other cryptocurrencies


The best ways to compare coins for potential are available if you subscribe to one of our plans.

See plans
Will coin go up and is it a buy right now?

BittsAnalytics, developed by the company Alpha Quantum, is a leading analytics platform for cryptocurrencies, delivering social sentiment and other cryptocurrencies data since 2017. Homepage:
www.bittsanalytics.com